Legends of the Jedi 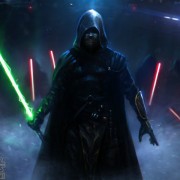 Legends of the Jedi is an RP enforced Star Wars mud based on a highly modified version of the SWR codebase. Lotj has been around since 1999 and has dominated mudstats.com as the #1 ranked Star Wars mud for at least the last several years. Lotj is the ultimate, text based, sand box style environment for Star Wars and Sci-Fi fans alike.

We support a wide variety of classes. Whether you want to be a cutthroat businessman who peddles stolen merchandise on the black market as a smuggler, or an upstanding engineer who enjoys crafting and experimenting with different components to make the best equipment and dominate the business arena.

Want to be a soldier or a bounty hunter? Both of these classes are supported in the game and provide a variety of skills for those who want to serve their government honorably or chase down anyone with a price on their head, with little care as to why. Maybe you just want to be someone's bodyguard or an enforcer for someone's nefarious crime clan. The choice is yours.

Pilots exist in a variety of functions. You can run cargo from planet to planet to turn a profit or lead an entire battle group of cruisers to wage war on an enemy clan. Some pilots even choose to be pirates and pry on weary travelers and cargo runners. Others might enjoy exploration and finding hidden sectors that contain mysterious planets or space stations that don't show up in the public database.

Slicing and Espionage, two different classes, are both well versed in information gathering and spying. Whether it's planting mics on other players, tapping comm terminals to listen in on comlink traffic, or simply planting cameras around a planet and watching who comes and goes.

All classes have a role and each race gets a different level bonus towards different classes, which creates a lot of diversity among characters for what skill combinations a particular character might have.

Classes are fun, but player interaction is the real charm of Lotj. Socializing and role playing with other players is where the drama unfolds and is the life force that has kept the game thriving over the last 15 years. Every class benefits from knowing someone with a different skill set, which encourages interaction and teamwork. Soldiers need blasters and engineers need someone to protect them. Information is a currency of its own and spies have it in ample supply, which they can trade for credits or favors.

If you're feeling adventurous, check us out. We also have an ongoing community project for developing a customized version of MUSHclient for Legends of the Jedi that includes chat mini windows, a built in star map that shows planet locations, and a room mapper to make sure you always know where you are going!