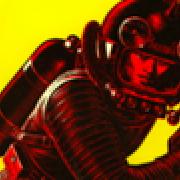 One hundred and twenty years ago, the prisoners of the penal colony on the Terran Moon rebelled. They rose up against their wardens in an explosion of violence and broke free of their chains, seizing control of the colony in less than a month. One after one, the lunar outposts fell to this coalition of former prisoners until the last remnants of the overseers were forced to flee into a fortified biodome known as the Hyperion Platform. There they have stayed ever since.

As the liberated prisoners pillaged the colony, its structures fell into ruin. Unchecked mayhem and brutality led to the destruction of many vital facilities, and soon the atmospheric generators themselves were starting to fail. As the habitable zone shrank, the prisoners found themselves corralled into an increasingly smaller area of the Moon. Here they settled, founding the town of Rust around the impregnable fortress of Hyperion. So began a century of strife, hardship, bloodshed and alliances.

These days, Rust is a sea of slums surrounding the biodome of the Hyperion Platform, a labyrinth of squalor and destitution. Six generations have passed since the prisoners overthrew their wardens, and few spare much thought to the origins of the settlement. Outside Rust, the Moon is a perilous wasteland littered with the ruins of outposts and work camps, some of which have been picked clean long ago while others are still combed by scavengers. Most denizens of the Moon prefer to stay in town, however, as the hazards of the lunar plains are well known.

The political climate of Rust is one of constant quarrel and competition. There are three major factions at play: the New Guard, Block Nine, and the Red Company. Each has its agenda and its patch of turf carved out of the town's geography, and the only neutral ground of the settlement is its market. Countless turf wars, rivalries, claims and disputes have taken place, and the rise and fall of leaders has been a constant feature of Rust's sordid society for generations. There is never a true winner, but always plenty of losers.

The denizens of the Moon, descendants of the prisoners who hailed from four different worlds in the Terran Planetary Federation, have not heard from their homes since the rebellion. Many choose to forget about the past, and indeed not much is known as literacy is all but extinct on this abandoned rock. People can trace their biological heritage to Earth or one of its colonies, some of which have environments that produce distinctive sub-species, but no one has any real knowledge of their ancestry save that they have all descended from the prisoners of the colony.

Hyperion is an intriguing mystery to the denizens of Rust. It consists of an enormous metal platform upon which is a reflective biodome, and it is presumed that the last of the wardens - or their descendants - live inside. Stories of untold luxuries and prosperity abound, every Ruster dreaming of breaking into the city inside and escaping the foul, hazardous and thoroughly depleted wasteland of the Moon. They have waited for that very moment for one hundred and twenty years.
Tweet