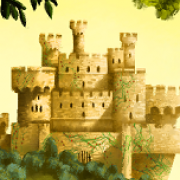 Rising Kingdoms is set in a large and mostly medieval world where fighters and spellcasters develop their strengths through their class's main stat, and to a lesser degree, level. Equipment can be crafted by Illusionists or modified through runes. Potions can be brewed by Alchemists and are far more potent than any potions to be found elsewhere in the world.

A mortal can reach a maximum level of 151, where at 150 he or she is considered a Hero and at 151 a Legend. But level development does not end there. An adventurer can advance infinitely by gaining faux levels. Once a Hero, the adventurer can remort and add a second class, the first remort costing questpoints, but any second class change thereafter is free. There are eight classes to choose from:

- Archers, fighters who hunt with bows and arrows.
- Clerics, healers and masters of defensive spells.
- Gaians, controllers of the earth.
- Illusionists, masters of deception and tricks of the mind.
- Mages, skilled spellcasters.
- Psionicists, those who harvest power from within themselves.
- Thieves, stealthy pickpocketers who throw stars and potions or wield daggers.
- Warriors, daemon summoners and masters of combat.

A character's first and second class can be changed and players can restart their characters at any time without deleting, allowing new players to test out as many classes as they want without worrying about making mistakes. After a race is chosen in character creation, it can be changed through faux levels, and most races can evolve into stronger versions of themselves. There are various humanoid races available such as Vampires, Elves, Ogres, Dwarves, Illithids, Angels, Pixies, Shadows, and Ratlings, among others. Some of the non-humanoid races include Nekos, Tressyms (winged cats), Hatchlings, Kitsunes, and Kyuubis.

Those who are new to mudding can start at our completely customized Newbie University where they can attend lessons on how to mud, make some gold and questpoints, get equipped, and take on some challenging and fun missions.

We would like to become a screen reader friendly mud and have already taken steps to make the game output more pleasant for the blind community.

We would love to see you on the MUD!