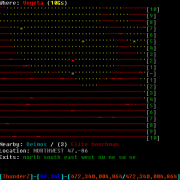 
Looking for a Dragonball experience that's about more than simply watching your virtual power level increase?

Drag(*)nball Z: FE is a Dragon Ball Z MUD run on a completely custom codebase that uses the BYOND engine. It was built from the ground-up, and seeks to follow the inspiration started by Trenton's Dragonball Z: Fighter's Edition (DBZ FE) and Rcet's Dragonball Z: Reality (DBZ Reality). Gameplay focuses on a completely interactive combat system, where your character only attacks when you give the order, and your defenses are similarly your own responsibility!
Features include:
Tweet